A brand new Community Room in Gourock’s only high rise, Eastern View, was officially opened yesterday and is already a hit with residents. 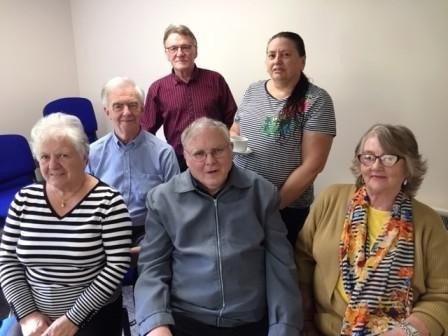 After the successful completion of River Clyde Homes' bio-mass heating project, our contractors, The McDermott Group, turned their hand to a completely different installation, and created a community room as part of the community benefit element of their contract, for residents of the block.

The empty room on the ground floor was previously an unused space but there was recognition that it could be transformed into an area that could be enjoyed by all residents. Fast forward a couple of months and the space is now unrecognisable.

Eastern View Resident’s Association (EVRA), were successful in their application for a River Clyde Homes tenant’s association project grant which they used to purchase chairs, crockery and an urn, and with a community library set up, the room has already been hailed a success by residents.

Hamish MacLeod, Secretary of EVRA, said of the room: “Already it has made a big difference. It’s the ideal facility for a lot of people. We have issued letters to residents asking them if they would be in support of a games night and other activities and we have already started a book lending facility.”

Victor Delussey, Chairman of EVRA, said: “I think the room is tremendous and a miracle change. Previously there was stone slab flooring and old chairs and abandoned furniture. It’s now a place where people can meet and get to know each other where previously they may just have passed each other in the corridor.”

Craig Russell, Service Improvement Manager, for River Clyde Homes said: “It’s a great facility for residents. The McDermott Group did a fantastic job in turning round a previously unusable room and transforming it into an area where people can relax, make a cup of tea and get to know each other better.”