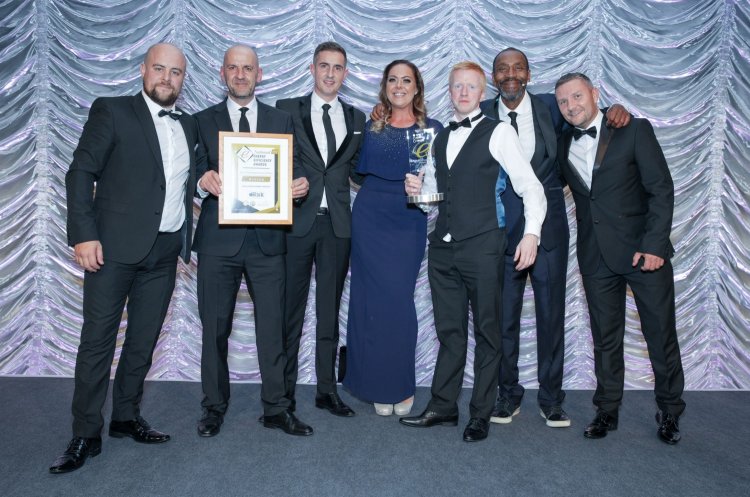 River Clyde Homes is celebrating success at the National Energy Efficiency Awards after scooping the prize for National Insulation and Fabric Project of the Year. The ceremony took place in Birmingham and the awards were presented by comedian Lenny Henry.

The Inverclyde-based housing association was nominated for the award by Union Technical Services for a project which saw 250 hard-to-heat homes across Inverclyde receive upgraded insulation. The work involved the extraction of old cavity wall insulation and infill of waterproof insulation beads which offer improved insulation to properties whilst allowing the building to breathe.

Alongside improving the thermal efficiency of the homes included in the scheme, the project aimed to reduce heating costs and raise living standards for RCH customers. It was financed through the Energy Company Obligation Scheme which sees energy providers fund works which improve energy efficiency and reduce carbon emissions.

The project is part of River Clyde Homes’ commitment to ensure that all existing housing stock meets the Energy Efficiency Standard for Social Housing (EESSH) ahead of the 2020 Scottish Government targets in order to reduce energy consumption, fuel poverty and the emission of greenhouse gases. The standard will contribute to reducing carbon emissions by 42% by 2020, and 80% by 2050, in line with the requirements set out in the Climate Change (Scotland) Act 2009.

The nominees had to be able to provide evidence of a customer who had benefited from the project and who was willing to endorse the project with a favourable testimonial statement.

The judges said of the winning submission: "This is a wholly social housing enterprise which considers the 'whole house' approach and adds significant value to both landlord and tenants alike ensuring that livings standards are improved across all measures"

Albert Henderson MBE is Chair of the River Clyde Homes Board. He said: “We’re delighted to receive this national award and would like to thank Union Technical Services for their nomination”.

Albert added: “The re-insulation project we undertook across Inverclyde might be small in scale, but it is having a huge impact, improving lives and places for our customers.  This is part of our ongoing commitment to offering quality homes at affordable rents, whilst helping to tackle fuel poverty.”

Kirsty Brown, Head of Business Development at Union Technical Services explained their nomination of the housing association for the award, saying, “River Clyde Homes was able to deliver a fantastic project which shows real benefits to their customers and this award recognises the team who worked hard to deliver the project.”

“We were impressed by the way that our teams were supported by a number of individuals in the field at RCH which meant our install teams could ensure that programmes of work were delivered effectively, with clear communication with customers and funding being fully utilised. The end result being that customer will be warmer this winter and save money on their energy bills as well as improving the housing stock of RCH.”